I feel incredibly privileged to be part of the blog tour for When Stars Are Scattered, a graphic novel by Victoria Jamieson and Omar Mohamed (coloured by Iman Geddy) which tells the incredibly moving true story of Omar and his brother Hassan.

Omar and Hassan had to flee their home in Somali after their father was killed by soldiers. They were separated from their mother, and after a gruelling walk with the other villagers of Mareerey, they arrived in Dadaab, a refugee camp in Kenya known to those who lived there as an “open prison”. They spent fifteen years there, being cared for by their foster mum, Fatima, who had lost all four of her sons in the war. Split into three parts, we see Omar’s physical and internal battle to protect his brother who suffers from seizures, gain an education and search for their mother.

I have thought long and hard about how to review this extraordinary book. Words alone don’t seem enough. In the end, I decided to pay tribute to this book with a “graphic review”.

I think it is important to say, that there is a pleasing author note at the end of the book, which gives an update on Omar and Hassan’s life today. The story ends with Omar (aged 19) and his brother being re-settled in America. In the after-note, (*spoilers*) we learn about the incredible work Omar now does, going back to Dadaab to help other refugees, having gained a degree in Arizona, married, and had five children of his own. Omar is the founder of Refugee Strong, a nonprofit organisation that empowers students living in refugee camps.

Victoria has also written an after-note in which she talks about the intimate reader experience graphic novels provide and I wholeheartedly agree. I think creating Omar’s memoir via a graphic novel has allowed this important but complex story to be much more accessible to middle grade readers and adults. Amongst some truly heart-wrenching scenes, are moments of humour and readers will be inspired by Omar’s bravery, resilience, and determination – I certainly was. It is a rare thing to find a book that can change your view of the world. When Stars Are Scattered is truly masterful and I highly recommend it.

Don’t forget to check out the other stops on the blog tour. 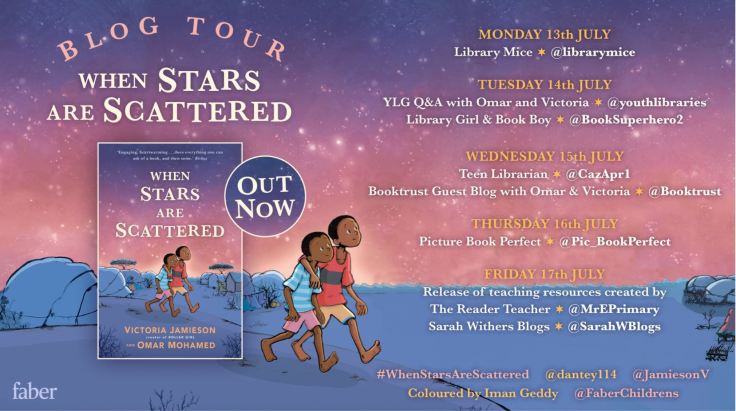 I am very grateful to the publisher for providing me with a complimentary copy of this book. This voluntary review contains my honest opinion.