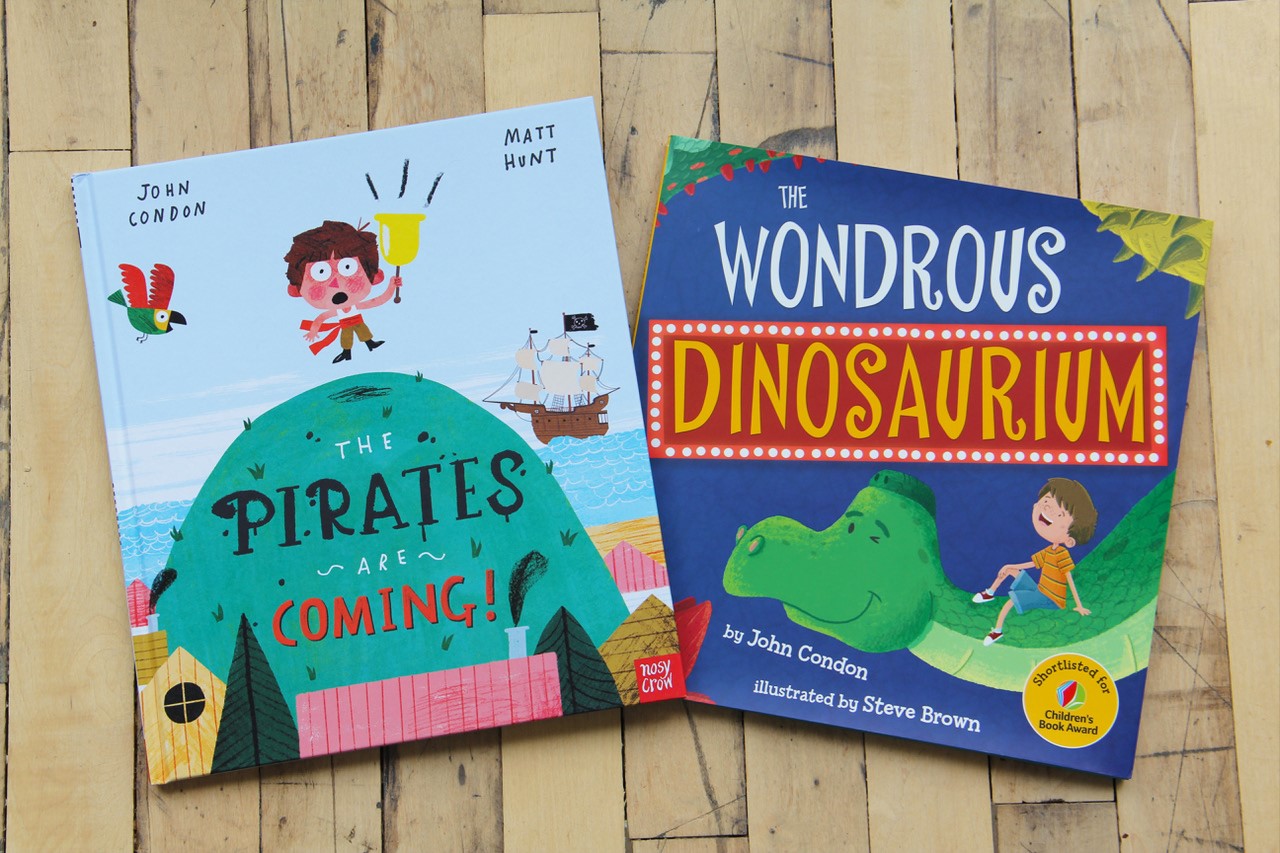 To celebrate National Writing Day 2021, picture book author, John Condon, is going to reveal all on generating story ideas. Many of you will know that John is the author of The Pirates are Coming (illustrated by Matt Hunt) and The Wondrous Dinosaurium (illustrated by Steve Brown). But what you might not know, is that John has a super power. He is the master of picture book idea generation – with over 700 ideas and counting!

John has been shortlisted for various awards including the Lovereading4kids Children’s Book Awards. The Pirates are Coming is a hilarious retelling of The Boy Who Cried Wolf, with not one but TWO twists! The Wondrous Dinosaurium is about a little boy who wants a pet dinosaur but soon realises that dinosaurs aren’t the easiest pets to keep. I think you’ll agree, both of these books have great hooks! But how do you come up with such fabulous picture book ideas?

Without further ado, here is the interview every picture book writer needs to read…

Hi John, when I read on your website that you have over 730 picture book ideas, I just had to find out if it’s true and where they all come from! Be honest… is it really 730?!
Eek! It’s actually closer to 750 now.

As you’d expect, being a writer, I try to be open to ideas. If someone says something funny, or I watch a documentary about something unusual or heart-warming, I’ll interrogate it to find out whether there’s a picture book story in there somewhere. Sometimes I am very tuned in, and I gather between 30-100 ideas in a month. To be honest that’s usually only when I’m doing Story Storm (formerly PiBoIdMo) which is great for focusing me. Other times I can go a month or two without any ideas at all. Occasionally an idea will just pop into my head from nowhere.

What’s vital for me is that as soon as I spot an idea, I write it down. If I don’t, I’ll lose it and probably never remember it. I used to do that a lot.

How do you keep track of them? Are you a notebook or an Excel fan?
I hardly ever write anything by hand. My handwriting is so atrocious I can barely read it. I’ve gone back to old notes before and haven’t a clue what’s in them. Luckily, I stumbled across the Notes app on my phone one day and it was a revelation. As mentioned before, I am prone to forgetting ideas if I don’t capture them immediately, so when an idea hits me now, I pause whatever I am doing (no exceptions) and write it down in the app. Once I have gathered a few ideas, I transfer them to a Word document, where they stay until I decide to write a new story. I’ll then open the document, scroll through it and see what inspires me. That’s probably not the best method but I have been doing it so long now it would be a nightmare to transfer the content to another program.

What makes a great picture book idea – one you just can’t wait to write?
Sometimes, when an idea arrives it comes with an ending. Sometimes not. In those cases, I jot the idea down anyway and if an ending suggests itself to me at a later date I’ll add it to the original idea note and then assess the idea again. If it excites me at that point, I transfer it from my general ideas document to a much smaller one that only contains the ideas I feel I am in a position to be able to write now, or at least begin to plot the structure for. If I jump the gun and start writing too early, I can get lost down rabbit holes and potentially kill the momentum of the idea.

I never write out an idea until I have the ending.

I have a few texts that are sitting in a virtual drawer because I got stuck in them. hopefully fixes will pop into my head someday and I can untangle those ideas but rather than pull my hair out I just pause them and move onto something else.

What makes a bad picture book idea – is there such a thing?!
For me, if an idea doesn’t raise a big smile, get a laugh, or feel like a warm hug at the end, depending on what I’m aiming for, it will be unsatisfying to read. So, my bad ideas are ones that don’t elicit any of those responses.

After you’ve had that initial idea, how to you go about developing it?
I don’t have tools, though I probably should. I have gathered a few over the years, via courses, workshops and books but I never remember them. Ha! So instead, I do the following…

You have two beautiful picture books, The Pirates are Coming, illustrated by Matt Hunt, and The Wondrous Dinosaurium, illustrated by Steve Brown. How long was it between the initial idea and publication?
That’s very kind of you to say. Hmmm, I think the first draft of the pirate story (which had the twist in place from the outset) was written in 2012, or thereabouts. The dinosaur book probably around the same time. They both got picked up within a month or two of each other at the back of 2015/early 2016.

Have you ever had that moment when you have a SUPER-AWESOME-AMAZING idea! And then go on Amazon and realize it’s already been done? How do you deal with those frustrations?
Yep. A few times. Not so much at idea stage. I don’t burden myself with that. If I come up with an idea that I know hasn’t been influenced by any other book I’ve read, I’ll just go with it and hope for the best. I trust that it’ll be different enough from anything else simply by virtue of being written by me. Unfortunately, not all of my ideas are as different as I’d like to believe. Ha! That means that once I have written a story and shown it around someone might point out a similarity to an existing book.

Recently I sent out a batch of stories and amongst them was one I really liked (I liked them all, but I thought this one was great). Two days later, TWO, a fellow picture book author announced on social media about an upcoming book which had the exact same title as my story. I then hunted around to find out more about it and found the synopsis on Amazon, which was very similar too. Even the description of the main character was word-for-word the description I had used for my main character. There were also a few sample pages and enough info to suggest how it ended. It was different in many regards, but the existence of that story may have killed any chance of my version being published. Fingers crossed mine still finds a home but I’m no longer as confident as I was.

What advice would you give to a write who is struggling to come up with original ideas?
Well, you can do what I do, just not worry about it and trust that your voice will make it feel original. If you go that route though you have to be prepared for potential disappointment if you find out later that something very similar is already out there. Really though that problem relates only to execution. When it comes to themes, I would suggest you don’t worry at all. If you decided not to write a pirate story because The Pirates are Coming! already exists, then that would be a shame. I don’t now own pirates, just as Jonny Duddle didn’t when I began writing my book. So, if you have a pirate story idea, just write it, me hearty.

If finding out later that your idea is a nonrunner is too deflating a prospect, which I totally understand, then I suggest you do some research at the outset. If there appears to be nothing like it out there, it’s probably original. Carry on writing. If there is something similar enough to make you twitch, ask yourself whether you can change an aspect of your story that would move it away from that other book. That might be the main character. The location. The journey. The ending. Or perhaps all of the above.

Thank you so much for sharing your candid insights in generating picture book ideas.
You are very welcome.

The Pirates are Coming was published by Nosy Crow, 6 February 2020

Tom has a VERY important job; every day he climbs to the top of the hill and watches for pirate ships. But when he rings his bell and shouts “PIRATES!” a few too many times – and there’s NO pirate ship – the villagers begin to get tired of hiding. So what will happen when the pirates really do show up?

The Wondrous Dinosaurium was published by Maverick, 28 August 2019

Danny wants a new pet but he doesn’t want a dog, a cat or even a parrot; he wants a DINOSAUR! However, it isn’t long before Danny realises that dinosaurs aren’t the easiest pets to keep.

John lives with his family in sunny Kent and enjoys weekend walks on the beach. Well, that’s what he tells people. In reality he loves nothing more than to sit in a comfy armchair, with a fresh cup of tea, dreaming up new story ideas. Very occasionally he will go for a walk on the beach but only after putting up a good fight.